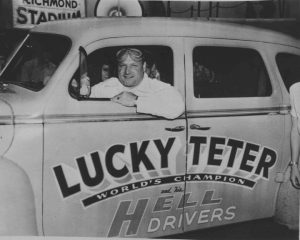 The 120-acre Teter Organic Farm sits on land donated by Ruth Teter in 1981.  Ruth's brother, Earl "Lucky" Teter, was a famous touring stunt car driver in the 1930s and 1940s.  Starting in 1934, Lucky and his "Hell Drivers" toured throughout North America (and even Cuba) bringing never-before-seen car and motorcycle stunts and precision driving to the public.  Teter was famous for driving one-handed while holding a handkerchief with his left hand out the driver's side window.  Eventually, Teter's Hell Drivers grew to 60 drivers with hubs in Indianapolis, Atlanta, and Langhorne, PA.  He was the owner of Ken Fowler's car that finished 19th in the 1937 Indianapolis 500, and also briefly owned Langhorne Speedway outside of Philadelphia, PA (now the home of Sesame Place Amusement Park). 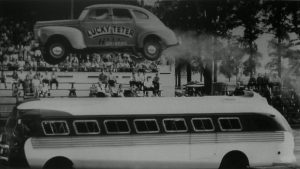 On July 4th, 1942, the 41-year-old Lucky Teter arrived at the Indiana State Fairgrounds for what he announced would be his last show prior to closing down in support of the war effort and enlisting in the Army.

Earlier in the day, he successfully made three World Record extending jumps - beginning at 135 feet.  For his fourth and final jump that evening, Lucky chose to jump 150 feet over two Greyhound buses parked end-to-end.  Before the jump, he dedicated it over the PA "To all servicemen everywhere."

Some in the crowd reported that they could hear the motor missing as he accelerated his bright yellow 1938 Plymouth onto the launching ramp.  Lucky Teter's car came down just a few feet short of the landing ramp, and he was tragically killed.

Our logo pays tribute to the Teter 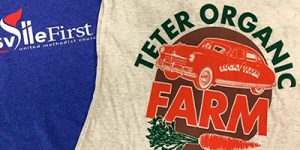 family and their desire to spread joy and goodwill to all people.

CLICK HERE to check out the documentary, Lucky Teter and His Hell Drivers.